Why Your ‘Social’ Drinking Isn’t So Social

We must stop using “everyone does it” as an excuse for irresponsible behavior. Let’s encourage one another in taking the drinking out of being social.

by Lisa Boucher
Should we be surprised that people who drink three or more drinks three to four nights a week still consider themselves social drinkers? Our culture is numb to people who drink too much; in fact, our culture supports frequent drinking. We make flippant comments about “wine o’clock” and “beer-30” to get a laugh. Brunch is rarely served without mimosas or a Bloody Mary. A person who doesn’t drink often, or perhaps doesn’t care to drink at all, is looked at as if there is something wrong with him.
We have stepped so far away from social drinking that no one knows what social drinking looks like anymore. Let me clarify for you. “Social” drinking is having a few drinks a few times a month, if that. A social drinker will celebrate with a glass of champagne on New Year’s Eve or at a friend’s wedding. A social drinker will go to dinner, have a glass of wine, and be done after one because they don’t enjoy that tipsy feeling and don’t want to feel out of control.
Contrast that with the millions of people in the U.S. with alcohol use disorder. According to the National Institutes of Health (NIH), 16.6 million Americans are already in the early stages of alcoholism, yet they continue to convince themselves and one another that they are “social” drinkers.
There are four simple questions you can ask yourself to help determine if you drink “socially” or if you may be drinking too much: 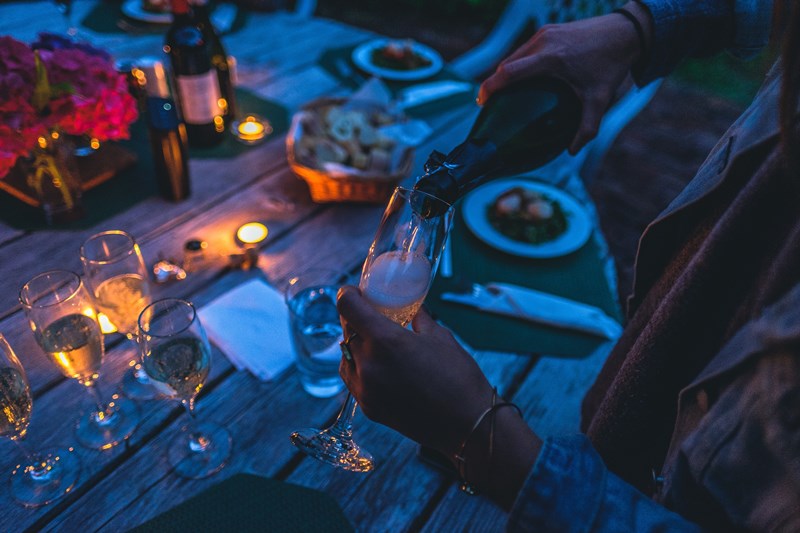 I’m quite sure that the mother who drinks at play-dates with her toddler would say that driving home with babies in the car after having several glasses of wine doesn’t align with her morals, but she believes “everyone does it,” so she doesn’t question the dangerous and possibly catastrophic behavior. There are men and women out there who have had serious consequences from their drinking — a DUI arrest, concussions, other health issues — yet they continue to label themselves “social” drinkers. An actual social drinker doesn’t have consequences as a result of drinking.
Social drinkers don’t have to drink in order to be social, nor do they have to pregame just so they can walk into a party and not feel self-conscious. We have become so immune to ubiquitous drinking — wine at book club and after yoga, sneaking booze in travel mugs to our child’s soccer game, day drinking at sporting events — that no one blinks an eye. We have come to accept this behavior as the norm, when in fact it is dangerous and certainly nothing to laugh at or celebrate. That level of dependency on drinking your way through social events is what leads to alcoholism.
Alcoholism creeps up on people, and before they know it, they are in a vicious cycle of depression and dysfunction that they can’t escape. They feel life unraveling, and in order to cope, they drink more. This is how alcoholism is birthed. We need to stop glorifying our drinking culture and instead look to ways we can support one another without holding a glass.
A good place to start is to not pressure the guy who orders a glass of water at happy hour to have a beer. Or by asking that woman who chooses not to drink how she copes with life when the pressure to parent, work and maintain a marriage all feels like too tall an order to maintain with decorum and serenity. Skip the booze at your next social event, and see how it feels to have real conversations (that you remember the details of the next day). As a society, we must stop using “everyone does it” as an excuse for irresponsible behavior. Let’s encourage one another in taking the drinking out of being social.
Lisa Boucher is the author of Raising the Bottom: Making Mindful Choices in a Drinking Culture (She Writes Press, June 2017). She holds a bachelor of arts in English and is the mother of twin sons, now grown. After short stints training polo horses, working as a flight attendant, hairdresser and bartender, she revamped her life and settled in as a registered nurse. For the past 27 years, she has worked with hundreds of women to help them overcome alcoholism, live better lives and become better parents. Raising the Bottom is her fifth book. Boucher lives in Ohio with her husband.