You could probably also call James Hart’s memoir Lucky Jim (Cleis Press, 2017), Lucky to Be Alive Jim. After all, he survived a traumatic childhood with an abusive father; the loss of a close friend (and first love); life in a Catholic seminary; alcohol and drug abuse; a pair of failed marriages, including one to superstar singer/songwriter Carly Simon; and the death of his son. He also came out as a gay man in the process. Hart doesn’t hold back in the telling of his warts-and-all tale, and there will be plenty of readers drawn to all the gory details. Especially fascinating are the number of high profile celebrities with whom Hart came into contact during his marriage to Simon, including Mike Nichols and Jacqueline Kennedy Onassis. I spoke with Hart about the book in the spring of 2017.

Gregg Shapiro: Jim, your ex-wife Carly Simon published her memoir Boys In The Trees in 2015. Did you read it?

JH: Yes, I read it more than once and even helped edit one of the chapters. She is a remarkable writer, and her work on getting to the truth is stunning. She possesses a unique and fascinating psyche. Boys in the Trees will give readers a taste of this. It may be her greatest artistic achievement — in a life of outstanding work.

GS: Why was now the right time for you to write your memoir?

JH: It was time for me to explore my life, to understand it in a different way. The range of my experience presented many challenges. It feels like I have lived many lives within one. I wanted to finally find a unity within it. Also, if I didn’t do it soon, I might never get to it. Like many writers, I guess, I just declared that the book had to be written, and I was ready to do the hard work of bringing it to life.

GS: Many memoirs include photos, but aside from the cover shot of you and Carly, there aren't any to be found in the book. Was that a conscious decision?

JH: I’m not sure it was entirely conscious, but I like the idea of no pictures. I didn’t want this to look like so many memoirs having to do with celebrities. Often, they strike me as saying, “Look how famous we are.” I also like no pictures because it doesn’t interrupt the reader’s vision that they are creating in their own mind. Each reader creates his own landscape, and I like that as a reader myself. 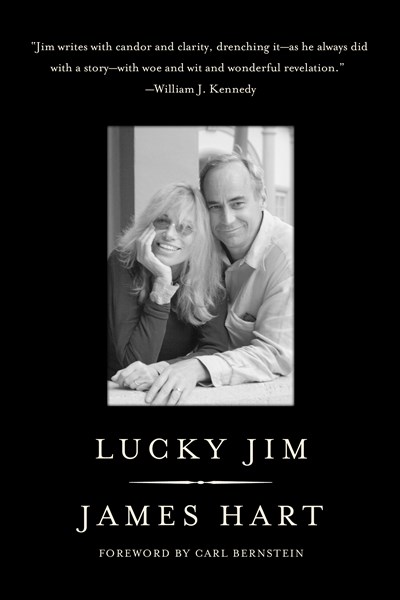 GS: Readers will be fascinated by how unaware you were of who Carly was, something on which even President Bill Clinton commented in your book. It’s something that can be correlated to your being cut off from popular culture while in a seminary at an earlier time in your life. At this point in time, however, would it be fair to say that having knowledge of what is happening in the outside world is essential to being of aid to others in the role of a priest?

JH: I think that was always essential for being a good priest. My being cut off from popular culture had more to do with me. There were many guys in the seminary who were very tuned into popular culture. I just wasn’t one of them. I think the way I drank may have had something to do with it. I wanted endless conversation and didn’t care much about contemporary songs. I thought they were banal and emotionally overwrought.
During my life with Carly, that opinion changed quite a bit. I began to see that it had more to do with cutting off my emotions. I learned about the kind of emotional response that really good lyrics and songs elicit. I also learned how difficult it was to write a good song. I now have enormous respect for the special kind of genius that Carly possessed and value it greatly.

GS: You write in Chapter 7 about, while in the seminary, Father Juniper’s advice to “learn how to drink,” regarding the priesthood and alcoholism, which will probably shock some readers. Was it shocking to you, too?

JH: I didn’t mean to shock anyone with Father Juniper. He was a most compelling man. He had enormous compassion, insight and intelligence. As I mentioned in the book, I wanted to be just like him. He was fully human and had a special dose of Franciscan humility. We remained life-long friends, and he was one of the most inspiring people I’ve ever known.

GS: Chapter 7 also includes references to your gay sexual experiences, as well as a memory of going to the Continental Baths where Bette Midler was performing. Among the famous people that you met while married to Carly, was Bette Midler one of them?

JH: I met Bette Midler a few times with Carly. They were brief casual conversations. A few years after Carly and I separated, I met Bette in a restaurant in the Village. We were both having lunch. We had a great conversation, and I told her where I had first seen her. We both roared with laughter as we thought about this odd coincidence. She seemed so lovely and so wonderfully open.

GS: Even though Chapter 9 is one of the shortest in the book, it’s one of the most powerful, as you write about attending your first recovery meeting.

JH: I was trying to render the sense of how bizarre it is for many people when they first get sober. For me, and many others, part of the miracle of recovery is that it is diametrically opposed to the life we had been living. Sobriety for me is a very strange accident. and that gives it the feel of a miracle — an unemployed taxi driver was the voice I could listen to so clearly. He had a truth and insight into life that was unvarnished. He wasn’t soft-soaping his own experience but sharing honestly the challenges of staying sober. The great hope was in my father’s favorite saying, “Every cripple has his own way of dancing.”

GS: Do you think it says something about Carly that her first husband, James Taylor, whom you write about meeting in Chapter 10, also had a history of substance abuse?

JH: It is interesting and curious, but Carly had other relationships with men who were not alcoholics. She is currently in a solid relationship with a partner who doesn’t suffer from addiction. Also, Carly never knew me high or drunk until the end of our relationship. Carly has enormous compassion for people in trouble, of all sorts, and perhaps that was part of her attraction to James and me. She was also attracted to many other good qualities in both of us. Sometimes it is tempting to make it all about addiction, but there are many other aspects in a person that lead to a compelling attraction.

GS: Chapter 22, about your crack cocaine use, is a remarkably visceral section of the book. Were you keeping a journal of your experiences at the time or did this chapter spring from memory?

JH: Unfortunately, I don’t keep journals, so it is all from memory. The journey through crack addiction was so dramatic that remembering many parts of it wasn’t difficult — sort of seared in the brain.

GS: Because you have been referred to as a guru, do you consider the writing of the book to be a means for you to help others who find themselves in similar situations?

JH: That would give me enormous satisfaction, if true. It’s hard to know how that works. If I can transmit the experience that I went through and it helps someone else, I would consider the entire project worthwhile. As I have said in the book, there is no feeling quite like the one experienced when one addict/alcoholic helps another.
From left: An unidentified man, Jackie Onassis, James Hart and Carly Simon (out of the picture) sailing on Martha's Vineyard in the summer of 1992. Photo by Peter Simon.

GS: As someone who knew Jackie Kennedy Onassis, I was wondering if you saw the movie Jackie, and if so, what did you think of Natalie Portman's performance?

JH: I haven’t seen Jackie. I’m sure I will see it sometime, but I did watch the trailer, and it seemed so one-dimensional. Jackie, in real life, had such breadth and wonder. I guess I’m just not that interested in a portrait of her that seems so Hollywood. She was so much more than that.

GS: Speaking of movies, if there was a film version of Lucky Jim, who would you like to see portray you?

JH: Ryan Gosling playing the younger and Frank Langella the older. Or Orlando Bloom the younger and Colin Firth the older. There are so many gifted actors these days, I’m sure many would fit the bill.
Gregg Shapiro is the author of Fifty Degrees (Seven Kitchens, 2016), selected by Ching-In Chen as co-winner of the Robin Becker Chapbook Prize. Other books by Shapiro include the short story collections How to Whistle (Lethe Press, 2016) and Lincoln Avenue (Squares and Rebels Press, 2014), the chapbook GREGG SHAPIRO: 77 (Souvenir Spoon Press, 2012), and the poetry collection Protection (Gival Press, 2008). An entertainment journalist whose interviews and reviews run in a variety of regional LGBT and mainstream publications and websites, Shapiro lives in Fort Lauderdale, Florida, with his husband, Rick, and their dog, k.d.
Related:
Rae of Light
With Every Beat of her Heart
East Village Voice