RESEARCH ON THE TOPIC OF SELF-MUTILATION

I was motivated to research the topic of self-mutilation, due to a multitude of tragic stories told to me by clients who had a history of self-mutilation. Their stories about therapists and medical doctors who were outrageously unkind are still shocking to me today.

One co-researcher (research participant) described a medical doctor withholding anesthesia while sewing up her wounds stating, “If you could do this to yourself without it, you don’t need it now,” which is untrue. His logic was that if she could cut herself at home without anesthesia then he did not think that she needed anesthesia at the hospital. He was wrong. By the time the client arrived at the hospital for help the cascade of numbing stress hormones had stopped and her trance (autohypnosis) was no longer as deep. Therefore she no longer had the pain buffer that stress hormones, endogenous opioids, and trance can provide.

It was my wish that the personal case histories described in my research study, which included the poetry and art by those who hurt themselves, would engender a greater level of understanding and compassion from counselors and medical personal in the health care system.

Completing research on the topic of self-mutilation by women who have a dissociative identity disorder was fraught with the normal challenges of research and research writing. Yet, due to the complex trauma and profound dissociation experienced by the research participants, there were additional mirrors of complexity reflected in the process of data analysis.

The terms self-harm and self-mutilation are often used interchangeably for those who self-injure. Yet, due to the extreme forms of self-harm by those in my study, self-mutilation was determined to be the more correct term. This term is not a judgment, but the correct nomenclature for the experiences described by my research participants.

I have worked with those who present with a history of profound trauma, dissociation, and often co-occurring self-harm or self-mutilation since 1987. Even so, I was not prepared for the unfiltered impact of listening. In each interview, I heard explicit, detailed, and often excruciating truths about how people physically hurt themselves.
I listened to these intimate stories of cutting and burning uninterrupted for four to five hours at a time.

I had not realized how helpless I would feel in the role of researcher. As a researcher, versus seasoned therapist, I was not able to intervene, offer treatment or soothing statements, or even (the lowest form of counseling) a temporary quick fix solution. My job was to be an objective listener, to record, and document. I listened to women describe scraping their skin, sometimes down to bone. I felt scraped down to the core of myself. I had no defense.

I collected the visual and verbal data. I then listened to the tapes and read the transcripts of each co-researcher’s (research subject) interview, revisiting again and again the detailed descriptions of self-mutilation. I lost patience. I felt saturated with blood.

I lost interest and motivation for my study. I began to procrastinate. For the first time in over a decade, I experienced counter-transference regarding the topic of self-mutilation. I felt the helplessness of my co-researchers and at the same time I felt helpless, as well. While I felt the intense emotions as my own, I also projected my sense of helplessness outward—the phenomenon of counter-transference.

Once again, counter-transference—a therapist’s or researcher’s projecting of their uncomfortable emotions outward to a client or research participant—is a defense and, therefore, biased. The inspiration for my study was my hope that a description of self-mutilation in the words of those who suffer would help promote understanding and compassion in service providers. For a short time, I was not living the integrity of what
I was trying to create.

I was running out of time and money. Tension was building, I knew that my stance of procrastination was not sustainable. Time, a significant element for those who self-mutilate, was beginning to be a critical element for me, as well.

I decided to paint a self-portrait as if I was a person who engaged in self-mutilation, in order to walk in the shoes of the women in my study—my overt attempt to achieve epoché (a time when all judgments are suspended).

I chose my art supplies carefully with the goal of epoché in mind. I decided to use clay-board instead of canvas. Clay-board is made with layers of earth clay adhered to a masonite panel and then sanded to a very smooth finish. The smooth, fine-grained clay surface is not unlike the texture of skin. The hardened clay can be etched and scraped.

I used a blind contour drawing process first used by European artists such as Rodin and Picasso: I drew without looking at the Clay-board surface. I was surprised, and not surprised at all, at the intensity of emotion I channeled into the brush strokes. I painted and then rubbed out the image, left shadows to be seen. I painted again; my strokes were more bold. I painted again and scraped cuts into the clay board with an exacto knife, replicating even the same instrument often used for self-harm. I painted over the scrapes but that was not satisfying enough…so I cut again.

I consciously placed the ancient symbol for psychology at my throat. I focused on my eyes and I left what looked like drops of blood amid the whirl of an energy storm.

I sat back, looked, and felt relief. 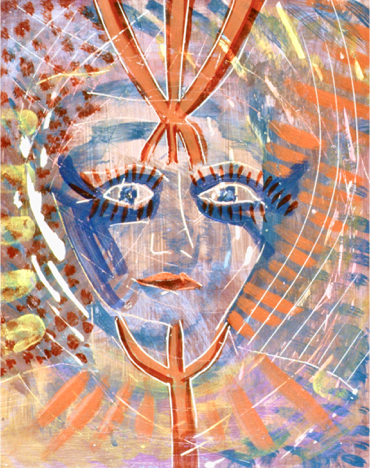 Pretending To Be A Person Who Cuts and Burns
© 1996 Blind Contour Self-Portrait by the Author Dr. Ericha Scott

Over the next few days my energy returned. I felt a renewed interest in the topic. I began reading academic articles again. I was able to read the transcripts of the interviews carefully with analysis in mind. My compassion returned. Most importantly, I felt an embodied sense of the elusive epoché. My judgments were suspended and I was able to be fully present and mindful.


Creative Arts for Resolution of Transference and Counter-Transference:

You have probably heard the aphorism that you cannot truly understand another person until you have walked in their moccasins for a mile. This phrase is the crux of my painting resolution. When dealing with counter-transference for those who self-mutilate, I needed a creative way to walk in their moccasins. This is why I decided to paint myself as if I was one of the women in my study. Doing so helped me reorient myself with understanding and compassion.