Intense Reactions RegardingSelf-Mutilation:
How to Identity and Resolve Transference & Counter-Transference via Art 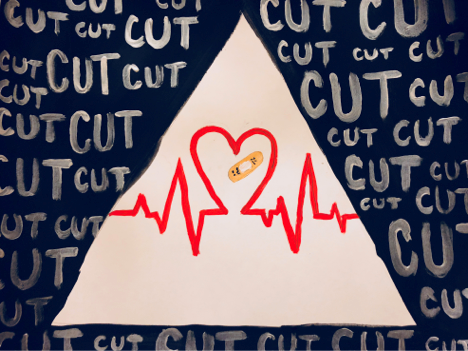 Everyone knows about transference, even if they do not know the meaning of the word.

Everyone has experienced it, especially those of us who have experienced childhood trauma, familial chaos, distress or mental health and addiction problems.

We might be conscious of transference, or not, or honest about it, or not.

We might recognize it via a person we disliked instantly and intensely who upon reflection, reminds us of a bully in high school.

Dory Previn, the ex-wife of Andre Previn, wrote song lyrics that illustrate the inherited legacy of trans-generational transference. Although her description is extreme, it embodies many elements of truth.

THE EMPRESS OF CHINA

Basically, transference means that we transfer unacknowledged, unexpressed or incomplete experiences from the past to those close to us in our lives today.

We might surprise ourselves by suddenly calling a spouse Mom – or Dad –  especially when we are particularly irritated or in the heat of an argument.

Yet, the action of transference can also include positive emotions. For example, there may have been a time we assumed someone’s moral code was much better than what it was in reality, because that woman or man reminded us of our decent and kind mother or father.

Transference means we project our negative and positive experiences, as well as our emotions and desires from childhood, onto another person in adulthood such as a supervisor, colleague, romantic partner and sometimes even our own children. The more intense the childhood experiences, positive or negative, the more intense the emotional transferences.

Transferences positive and negative can be triggered by a similar physical appearance to a caretaker in childhood, a tone of a voice, a certain critical expression, the scent of a perfume or cologne, as well as an age, power or gender differential. The triggers can be small, and seemingly insignificant, but powerful.

In the case of the phenomenon of self-mutilation, the transference appears to capture something more than unexpressed emotions or experiences from childhood, but also, a primal revulsion to pain and blood.

This article explores the cognitive defenses of transference and countertransference.

I believe that it is important for the general public to understand the phenomenon of transference and how it can undermine relationships. It is also important to understand how it can be resolved with accountability. For example, around age 27, I attended Terry Kellogg’s Life Works Intensive with my family. A therapist there reminded me of my alcoholic mother. In advance, I told her of my potential transference. She responded with such loving care that the transference dissolved and she became a powerful support ally for me during the week long intensive.

I believe it is also important for the general public, addicts and those who have mental illness to understand counter-transference. I say this because if you feel unfairly treated by a 1) health care practitioner, 2) teacher, 3) spiritual mentor, 4) sponsor or 5) supervisor then the construct of counter-transference might help empower you to speak and stand up for yourself. In other words, Pia Melody’s adage, “My feelings about you are more about me and my history, and your feelings about me are more about you and your history”. This simple phrase can be very helpful with regard to setting and keeping emotional boundaries.