An Interview with Lisa Boucher, Author of “Raising the Bottom”

The stories shared in “Raising The Bottom” demonstrate that alcoholism does not follow a single narrative, that people from all walks of life can be affected in one way or another. What do you hope people will better understand after reading your book?

I purposely choose to highlight women who were professionals, mothers, teachers, and grandmothers. I wanted to show that the stigma of addiction is what keeps so many people out there drinking. Women, especially, are terrified to think of themselves as an “alcoholic” so they continue to drink even when many are so dissatisfied with their lives. Women don’t realize that much of their unhappiness may be due to drinking too much. Alcohol is a depressant. Too many women fail to make that connection. Instead, they go to the doctor and start on antidepressants. The drinking and the unhappiness ensues. It’s a vicious cycle. I wanted to show that women don’t have to live like that and that there is a great life awaiting them on the other side of the booze.

Why did you decide to write “Raising the Bottom” at this point in your life?

My mother had passed in 2011. I believe this is the book she’d always hoped I’d write some day. Many times, when I wrote fiction she’d ask, “Why don’t you write a book about alcoholism? So many families are in trouble.” I think I needed to wait until I had the angle and the perspective that I have now. After working with so many women for so many years, I realized that almost all of the women I helped were employed. They had families. They went on vacations. They shopped and cooked and did all the things that other people do. These women had lives that looked nothing like the life of what people think of when they hear the word “alcoholic.” It was time to show the other side alcoholism to help end the stigma. 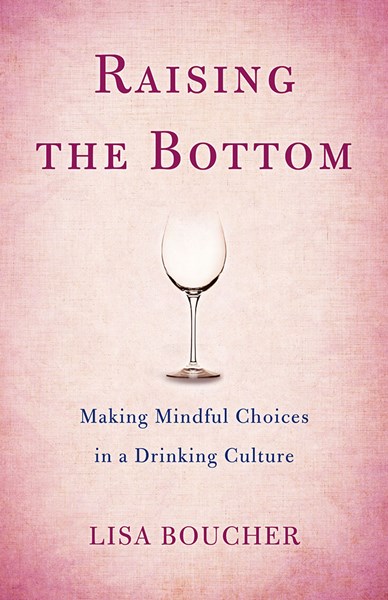 I watched my mother for 21 years look to medical professionals to help her. None of them ever did. In fact, they made things worse with all the medication they prescribed. I got sober very early in my disease because I didn’t want to hit a low bottom like my mother did. She broke her neck when she fell down the steps. The other lie people believe about this disease is that a person has to lose it all before they will quit. I lost nothing. I didn’t hit a low bottom at all. I quit before I was even a daily drinker. I never blacked out. People hear that and immediately think, well then you can’t be alcoholic. My hope is that if people could understand what early alcoholism looks like, maybe they could make a better choice and stop drinking before it destroys their life, and the lives of their family. One alcoholic in the family impacts everyone in some way, and you don’t have to ruin your life before you decide to get sober.

How much of a role did your professional experience as a nurse contribute to your motivation for writing this book?

It contributed mightily. I got sick of watching doctors do the same thing day after day to other people that they did to my mother. I don’t believe the medical professionals are malicious; most doctors don’t understand alcoholism so they do what they were trained to do and that’s prescribe medication. Too many people come to the hospital with drugs and alcohol in their systems. The doctors NEVER or only rarely address the substance abuse. Also, even if they do acknowledge it, they still don’t do the right thing. You cannot medicate someone into sobriety. Doctors also enable patients by allowing them to come to the hospital over and over again without talking to patients about their drinking and drugging. I’ve yet to see anyone get well. Instead, the hospital has an abundance of repeat business. They offer a place for customers to come instead of cures.

Why did you choose to focus on women, specifically, in your book?

The biggest surprise is that men have loved the book as well as women. There are a few men in “Raising the Bottom,” but I wanted to focus on women because that’s what I know. Men may have some different issues and feelings and I didn’t think I could speak to that as accurately since most of my experience has been in working successfully with women.

Why do you think women’s drinking is under-discussed?

The alcohol companies spend $3.45 billion on advertising, and it’s working. Wine companies are now starting to use gender based marketing. Wine is linked with yoga, painting, available at salons and bridal boutiques. “Wine Time” is all over t-shirts. Plastic wine glasses that have bright colors with lids are everywhere. People now drink at times and places that were never acceptable before, like toddler play-dates. Adults even sneak alcohol into games at kids sporting events. Parents come home from work and drink every night. It’s all so over the top and it’s not normal, but we’ve normalized daily drinking, and for too many, it’s how alcoholism starts. Furthermore, it’s under discussed because all the advertising and marketing has people believing they can’t have fun without alcohol. Women are also afraid to stand up to the nonsense because they fear if they do, they will lose friends.

Where do you personally draw the line between social drinking and disordered drinking?

When you have to drink around your children. When you have a toddler on your hip and you keep pouring more wine. If a woman has to drink “to calm her nerves” or “relax,” these can be early signs that alcohol has become their coping skill, and it’s a very good indication that their drinking will escalate at some point in their life. Social drinkers never use alcohol as a reward or a coping mechanism.

What are some of the early signs of disordered drinking that others might not recognize?

The woman who always complains of depression and anxiety. The person who is emotionally immature is often a drinker. The person who can’t seem to ever get it together even though they may have all the necessary education and whatnot; the person who can’t hold a job because of their “attitude” problems. The person who has conflict in all of their relationships—alcohol is often the underlying reason. The person who dates abusive partners may have low self-esteem and use alcohol as a means of coping. The person who goes to the doctor constantly may be drug seeking. The person who makes everything an excuse to have a drink may be too attached to alcohol. The person who never wants to take personal responsibility and often blames others for everything could be someone who drinks a lot and is heading into alcoholism. People who buy foldable wine bottles to hide in their clothes, or people who buy purses with spouts so they can hide wine boxes. People who drink a lot are often very controlling. If someone is a control freak, my first reaction is always, I bet they’re a drinker, and most times the assumption is correct, or they’re a doormat and allow people to walk all over them. Those that are self-absorbed are often people who drink a lot. The party-people who think about no one but themselves and the next party. That sort of mindset is not healthy, and alcohol is already a significant player in that person's life. Healthy people don’t have the need to micromanage or control others. Quantity does not have to be the only factor. The emotional immaturity is often more telling than even how much booze they drink. People don’t understand the way that alcohol stunts a person’s emotional growth.

The subject of alcoholism can be intimidating. What would you tell people who might be hesitant to read this book, whether due to denial or stigma?

Don’t be afraid! I have yet to meet one woman or man who decided to address their issue with alcohol who wasn’t thrilled with their life on the other side. It’s the fear of the unknown that keeps so many people stuck. People fear a new life because they feel they still need to control how things will go, and sobriety is all about the letting go.

The book is not just for alcoholics though. We all need to understand addiction, what it can look like, how it manifests in people’s lives, and what to do about it. There is a solution—and it’s not more medication. If people could walk away from the book with even that, I’d be thrilled! Besides, more and more families are having to deal with the issue. Everyone has that friend, coworker, significant other or spouse who may need help. Alcoholism is only intimidating when you ignore it.

I also did a chapter to highlight how kids feel about their parent’s drinking. I think parents need to be more mindful of what they role model. Kids do pay attention. The drinking culture helps cultivate future addicts and alcoholics. What else do these kids see but their parents and friends drinking quite a lot and quite often? Parents are stunned when their kids start drinking or end up on heroin. If we don’t dial back the drinking culture and show them something different, how can we continue to be surprised?

In her 28 years of sober living, Lisa Boucher has worked with hundreds of women to overcome alcoholism, live better lives and become better parents. Published by She Writes Press, “Raising the Bottom” is her fifth book and available at roughly 150 libraries throughout the United States. She was prompted to write “Raising the Bottom” when she realized after 20-plus years of working in hospitals, that doctors and traditional health care offer few solutions to women with addiction issues. She is the mother of twin sons and lives in Ohio with her husband. For more information, visit RaisingTheBottom.com.