Fun and fitness is only a stone’s throw away 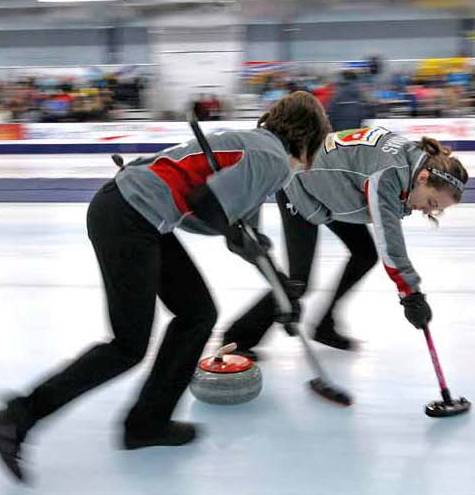 It is at once graceful and cartoonlike: One player pushes off and glides across the ice in a frozen lunge, a leg bent 90 degrees at the knee and the other stretched out behind like a rudder. The player and the heavy stone disc he slides in front of him are briefly one until he lets go and the stone continues its icy path, slowly rotating. It’s not alone.
Two teammates bracket the sliding stone on each side and track its course. As the stone approaches its destination, the players begin to furiously scrub the ice in front of it with compact brooms, trying to affect its trajectory.
Then the stone slows, the scrubbing stops. The stone comes to rest in the heart of a bull’s-eye painted underneath the ice, and the teammates high-five one another. They’re in the lead—for now. Their opponents are already readying to repeat the same icy ballet, hoping to knock the carefully placed stone out of the way and get a closer position of their own.
This, more or less, is curling.
No longer an obscure game that few have heard of and even fewer have played, curling has mainstreamed as a legitimate sport with a growing number of players across the country—even in warm weather places such as California and South Carolina.
And it’s fun for everyone, a sort of mad cross between bocce ball and bowling, ice included.
“Curling really is an all-ages sport,” says John Benton, a member of Team USA’s curling squad at the 2010 Olympics in Vancouver. “I started when I was six, and you can play until you’re 80.”
That generation-spanning appeal, along with the increase in awareness of the sport brought about by national and international coverage of the Olympics, has created a boom for curling in the U.S. According to USA Curling, the organization that oversees clubs across the country, membership has increased by 53 percent since 2002.

The sport has Scottish origins dating back to the 16th century, when farmers gathered on frozen marshes and used flat-bottomed river rocks that had been smoothed by the current of the water.
The game was eventually brought over to North America around 1800 by Scottish immigrants and blossomed in, not surprisingly, northern areas such as Michigan, Minnesota and Canada.
Modern methods of refrigeration started to move the game indoors in the 20th century, where the playing surface could be standardized. Today, nearly all of curling is played indoors, in part because of the surface—the ice is sprayed with droplets of water that form what are known as pebbles when they freeze. This pebbling creates an icy surface that has less friction than a completely flat sheet of ice otherwise would, enabling greater precision and control.

Rules of the Game

The game itself is played in 10 ends, each of which is made up of 16 alternating shots (eight per team). The ultimate object is to finish with your team’s stone closest to the center of the bull’s-eye, or house. What’s more, you can score multiple points if you wind up with multiple stones closer than any one of your opponents’.
As you might imagine, some complex strategy can quickly arise when there are four or five stones in the house blocking easy access to the center. In fact, many of the early throws of each end—appropriately called guards—may be designed with the sole purpose of obstructing the opponents’ shots. In response, an opposing team may use a more high-velocity shot to simply take out impeding stones and make way for later scoring attempts. The stone can also be delivered in such a way that it actually curves, ideally creating a better angle to hit or go around another stone.
Some measure of control can be exerted on the stone while it’s on its way down the ice by sweeping the ice in front of it. The friction of the scrubbing melts the ice enough to create a thin layer of water that the stone can move along, increasing its distance and speed and decreasing the amount of turn or curl of the stone.
Usually one of the teammates who is not sweeping, called the skip, will call out directions to the sweepers indicating the ideal line of the stone.

All of that sweeping actually adds to the fitness of the sport as well; some say that curling is one of the highest-rated anaerobic sports due to the intense increase in heart rate followed by down periods. Beyond that, curling requires a good deal of flexibility and strength in order to repeat the same motion needed to be consistent when throwing.
But in the end, anyone can do it. All that you need to do, Benton says, is find a nearby club and show up, ideally wearing loose-fitting clothes. Someone there will be able to show you the ropes your first time out, and if you’re hooked, you can get involved or even join a league.
For his part, Benton says that he loves introducing new players to the sport. “It has its roots as a social game,” he says. “It’s a unique and special brand of people, an open and genuine group.” Benton, who has 11 years of sobriety, says that they’re the kind of people who can become “lifelong friends, not just casual friends.”
There is, of course, no guarantee of that. But there is a promise of smooth ice, gliding stones and a shot at something new.

David Moran is a freelance journalist who resides in Los Angeles. For more information on curling, visit curlingrocks.net.