Aftercare Spotlight: Centering Prayer Can Bring Silence to Your Soul

Dick Young’s search for peace started 50 years ago when his wife, Carolyn, gave him an ultimatum: “Either get into therapy or we get a divorce.” Five years and 250 therapy sessions later, he began facing the demons that haunted him since childhood when he was abused by an alcoholic father and narcissistic mother. It left him with a stutter and an inability to master reading, writing and arithmetic.

“Without the Twelve Steps and Centering Prayer, I’d be a raging maniac right now filled with anger and resentment— someone who couldn’t feel one feeling,” Young says. “I’d be dead or in prison.”

Young went on to graduate from college, marry, get sober, raise two children, work his way up the corporate ladder and in 1999, retire as the chief financial officer for a Fortune 500 company. Even more important, he works the Steps daily and claims to experience those intangible blessings of freedom and peace promised in the Big Book. He insists it’s all due to the support of loving people who crossed his path along the way, and he’s spent most of his life trying to return the favor. 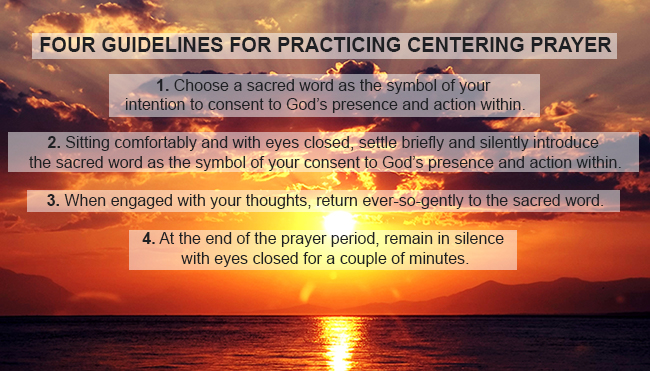 Young’s workshops, “Exploring 12 Step Spirituality,” are one way he hopes to give back. The three-hour sessions are held once a month and include testimonials, group discussions, readings from the Big Book and 20 minutes of Centering Prayer meditation.

“Centering Prayer,” he explains, “is one way to work the 11th Step, with the goal of improving our conscious contact with a Higher Power through prayer and meditation. They’re both very compatible. Like the Twelve Step program, Centering Prayer is all about surrendering to something bigger than ourselves and deepening our relationship with the Divine.”

For Young, discovering Centering Prayer was a turning point and something he unabashedly calls a “God-touch.” “We had just lost our son in a tragic accident, and his death was devastating,” Young says. “He was only 25. Carolyn and I were in bad shape. We read some books on grief, and one of them talked about the healing power of meditation, so my wife started to do Centering Prayer. I have ADHD, and sitting still for 20 minutes twice a day was unimaginable. But I saw the changes in her and decided to try it. Three years later, I got up from my 20-minute session and realized the pain was gone. I still miss my son, but after three years of meditating, the octopus of pain that was strangling me had let go.”

Young explains that Centering Prayer is a form of meditation practiced by the desert mothers and fathers in the third century and eventually entrusted to monastic communities for safekeeping. In the mid l970s, Thomas Keating and two other Trappist priests repackaged this ancient prayer for the modern world, called it Centering Prayer and introduced it to the lay population.

Centering Prayer enables us to move deeper into our hearts and just be, Young says. “We sit in silence twice a day for 20 minutes,” Young says. “We say nothing; we ask for nothing; we just surrender to the moment and allow God to be with us. Keating has said that ‘silence is God’s first language. Everything else is a poor translation.’ So we sit in that silence, listen with the ear of our hearts and gradually wake up to the presence of God.” How has this practice changed him?

“The best way to answer that is to ask someone you’ve known for a long time,” Young says. “So I asked my wife of 54 years if I’ve changed, and she said ‘Yes! It’s unbelievable. No one from your past would know you today.’

“I’ve seen other people change also. It’s in their faces—there’s a quietness there, a peace and joy. They slow down. They are more accepting. They know a loving God is present in their lives. And isn’t that all any of us really need to know?”

Kathleen Lindstrom is a freelance writer in Minnesota. She has been published in anthologies, e-zines and literary magazines.

A Work in Progress
The First Cut Is the Deepest
All of a Sudden, I Loved Myself